Date: November 23-24, 2008
Fee: approximately JPY 50,000 (to cover roundtrip airfare between Haneda and Wakkanai plus one night hotel accommodation), to be confirmed*
Maximum Participants: 20 (priority given to overseas participants）
Schedule:

Nov.23 (Sun)
11:30 Leave Haneda airport by ANA571
13:15 Arrive at Wakkanai airport, leave for Cape Soya by chartered bus
15:00 Arrive at Cape Soya
Cape Soya is the northernmost point in Japan, marked by a monument commemorating its northernmost location and also a statue of Rinzo Mamiya, a famous Japanese explorer, who surveyed the whole of Hokkaido and Sakhalin Island at the beginning of the 19st century. On clear days it is possible to see the Russian Island of Sakhalin which is only 43 kilometers away. Located on a hill overlooking the cape are several monuments and a small lighthouse. One of them is “The Bell for World Peace,” which is made from coins from many countries in a replica of the bell situated in the garden in front of the United Nations Building in New York City. Another is the “Tower of Prayer,” which was built as a memorial to the passengers of a Korean Airlines plane shot down by the Soviet air forces just north of the cape in 1983.

Nov.24 (Mon)
8:00 Leave Wakkanai ANA hotel
9:00 Arrive at JAEA Horonobe
Visit the underground shaft and drift of the Horonobe Underground Research Center of JAEA (Japan Atomic Energy Agency)
JAEA is pursuing an underground research laboratory (URL) project to conduct a systematic research on geological disposal in a Neogene sedimentary rock in Horonobe-cho, Hokkaido since March 2001. The project consists of two major researches: ‘Geoscientific Research,’ a scientific study of the deep geological environment, and ‘Research and Development on Geological Disposal’ for improvement of reliability on the geological disposal technologies and advancement of safety assessment methodologies.
Planned over a period of about 20 years in three phases, the first phase consists of surface-based investigation including microbial studies of deep groundwater (6 years); phase 2, investigations during construction of the underground facility (6 years); and phase 3, experiments using the constructed facility (9 to 11 years). The project is currently in phase 2 and thus far excavation of the ventilation shaft is -233m, the east shaft -140m and the west shaft -0m (all figures as of September, 2008). 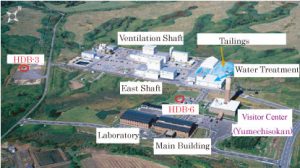 * For those attending the 24 th JSME (The Japanese Society of Microbial Ecology) annual meeting which will be held at Hokkaido University from November 25 to November 28, 2008, they need only pay for the hotel accommodation (approximately JPY10,000) and arrange for their own transportation to and from Wakkanai.