Currently, many industrially-used functional materials contain toxic element that  may raise  concern about  the environment pollution. The development of new green materials with excellent performance is a challenging issue for the material sciences. In order to essentilally solve this issue, new ideas or concepts of material design are required. We are  trying  a new venture with a goal of seeking potential green materials that have excellent performance and may be used in practice by new ideas or  concepts of material design. Our group mainly  focuses on developing new functional oxide materials including electro-optical crystals, ferroelectrics, piezoelectrics, and superionic conductors, and understanding its basic physical properites and the underlying physical mechanisms. 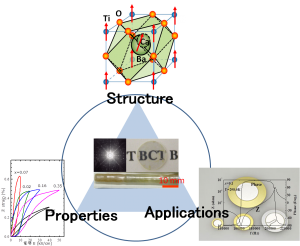 Controlling ferroelectricity of BaTiO3 by small ion off-centering
The unique dielectric, ferroelectric, piezoelectric and nonlinear optical properties discovered in well known BaTiO3 offer various applications including capacitive devices, memories, various sensors, and electro-optical modulators. However, (i) the difficulties in efficient growth of large crystal arising from the structural transformation between hexagonal to perovskite phases at 1733 K and (ii) the discontinuity of physical properties due to a phase transition around room temperature, have been hindering both its technological applications and fundamental studies.
Here, we demonstrate that these two issues can be solved by introducing small Ca into the bulky Ba-site. Firstly, Ca-substitution stablizes the perovskite structure, and allows us successfully to grow a class of large single crystals of BCTO with 0.02< Secondly, the off-centering of small Ca lowers the total energy of crystal, leading to the controlling of its polarization state by the Ca-concentration. At a critial compostion of xc=0.233, the polarization state is changed from the orthrombic direction to the tetragonal one at 0 K, giving rise to quantum ferroelectric- ferroelectric transition. The quantum fluctuation effects enhance the dielectric response at large temperature range, resulting to the great improvement of its temperature performance comparing with pure BaTiO3. 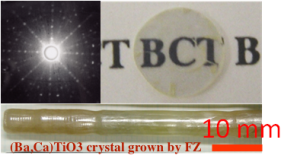 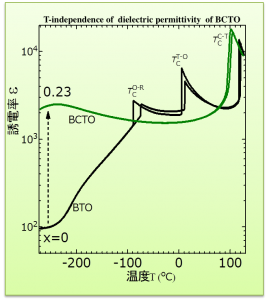 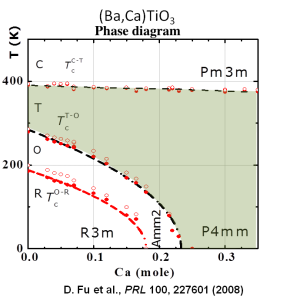 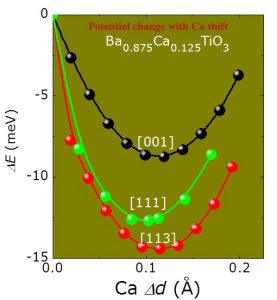 Unraveling mystery of relaxor
Relaxor Pb(Mg1/3Nb2/3)O3(PMN) has an exceptionally high dielectric response in a large tempearure as being compared with conventional ferroelctric BaTiO3, making it very useful in many applications. An unsoleved issue in relaxor is the underlying mechanism for such huge dielctric response.
We successfully traced the history of its polariation state at various electric fields and temperatures. We found that the huge response in dielectric constant is essentially due to the effects of polarization reorientation. More importantly, it can be seen that PMN a nanosized ferroelectric with large polarization for T<Tc=225 K.
We also revealed its microscopic structure by temperature-variable TEM. For Tc<T<TBurns, local polarization occurs in nanoregion. Such polar nanoregions (PNRs) are randomly oriented and are easily fluctuated by the thermal energy, leading to a huge dielctric response in this temperature range.
Although PNRs can not grow to micrometer because of blocking by chemically ordering regions (CORs), they team together to form a larger domain structrue as T<Tc. Such multi-scale domain structure is very interesting, offering a new way to design materials with large electromechanical response in future. 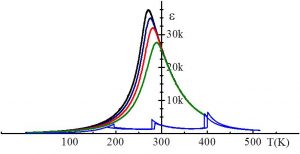 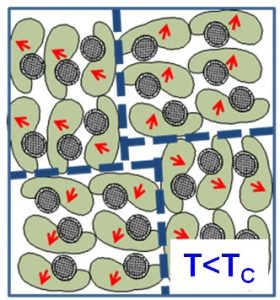 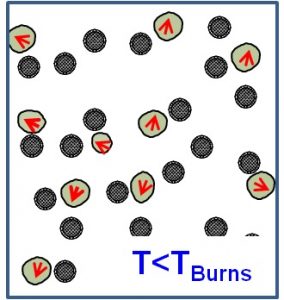 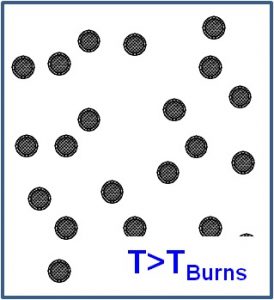 Finding of strong ferroelectricity in Ag-based lead-free materials
Piezoelectrics convert mechanical energy into electrical energy and vice versa, offering innumerable applications for sensing or actuating elastic changes. The drawback of current widely used PZT ceramics is that they contain a 60 weight percent of hazardous lead, giving rise to a serious environmental concern. The excellent performance of Pb-based materials is generally considered to be deeply related the strong polarizability of Pb. On the basis of the depthful investigation, we anticipated that silver should has a strong polarizability in perovskite structure. In fact, we have demonstrated a huge polarization of 52 µC/cm2 in AgNbO3 polycrystal under high electric field, which is twice of that of BaTiO3 single crystal and even comparable to that of PbTiO3 single crystal. When combining the strong off-centering nature of both Ag and Li in the perovskite structure, we alos successfully developed a new class of Pb-free piezoelectrics: Ag1-xLixNbO3 crystals. The piezoelectric voltage constant g33 of this simple perovskite crystal was found to be about two times larger than that of PZT. These findings point to a novel direction in exploring and designing environmentally friendly piezoelectric devices. 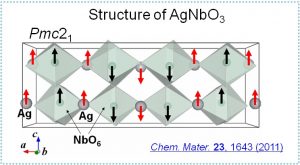 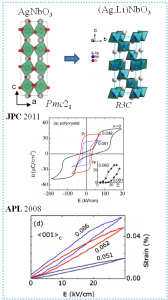 Size limit effects in ferroelectric nano-crystals
With the continued demand for portability in consumer electronics, it is becoming increasingly important to understand the effects of miniaturization on the properties of the active components in electronic devices. In many cases, particularly the ferroelectrics, however, the basic physics of such size reduction is poorly understood and may be difficult to characterize. Although recent theoretical works has predicted that the critical size for the ferroelectricity is order of magnitude of several nanometers, the experimental investigations on the real size effect is still a challenging task. By studying the size dependence of the structural phase transition in PbTiO3 nano-crystals, we find that ferroelectricity persists down to small size of 7 nm in PbTiO3. More recently, we overcome many practical difficulties in performing direct electrical measurements, and have successfully confirmed the existence of ferroelectricity in near-single BaTiO3 nano-crystal as small as 25 nm by using PFM, verifying the theoretical predictions. 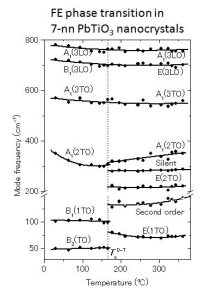 Nano-scale characterization and manipulation
The development of real-space probes of atomic and electronic structure has revolutionized our understanding of local structure in a wide variety of scientifically and technologically important systems. The combination of AFM technique with piezoelectric effects inherent in ferroelectrics enables the manipulation and characterization of nanoscale polarization domains of ferroelectric system, which can be used both for applications and to understand the fundamental issues on ferroelectric domain: switching mechanism, domain stability, and switching speed. The successful establishments of Piezo-response Force Microscopy (PFM) based on the commercially available AFM system enables us to investigate the switching mechanism and domain stability in thin films such as PZT or Bi-layered-structure thin. These investigations reveal a new picture of switching process in nanoscale: domains nucleate first from the surface and then grows via both forward and sideways growth. 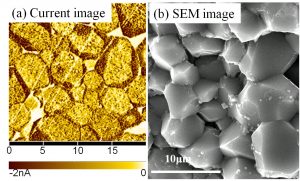